Heading into the Ridesharing debate

So here’s the skinny on ridesharing and my thought process leading up to Tuesday’s debate: 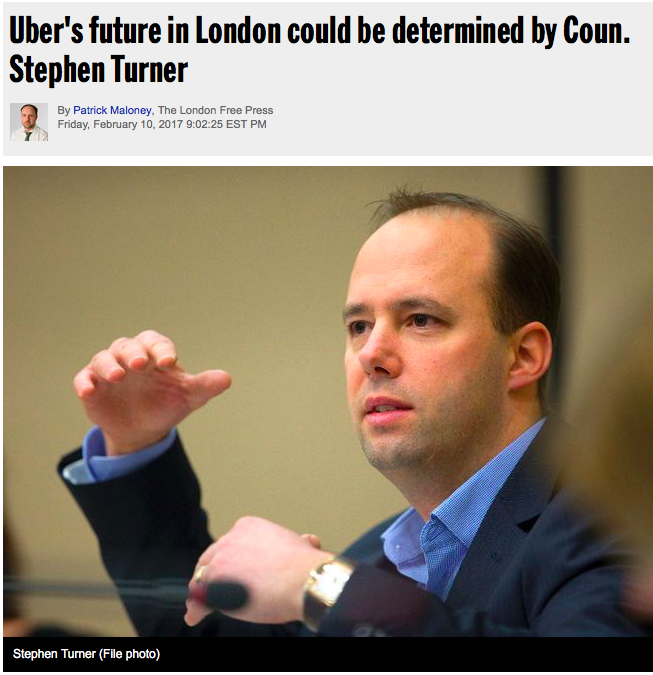 Early in our term, Uber approached the City and asked for us to amend our vehicle for hire bylaws to allow them to operate in London.  Council considered the request and embarked on having the bylaw updated to allow for ridesharing businesses (aka Transportation Network Companies or TNCs).

In my opinion, the taxi bylaws have evolved into somewhat of a dog’s breakfast as staff and councils past have attempted to provide consumer protection while maintaining some sense of regulation of the taxi industry. In my opinion, it would be great if we could just start the whole process of regulating vehicles for hire from scratch but unfortunately, due to a lot of legal reasons, we can’t (I’m very opposed to the concept of transferrable licenses, for example).

So now we find ourselves in the middle of a turf war between the taxi industry, the limousine industry and the upstart TNCs such as Uber.  Understandably, the taxi industry is worried about their market share, as they were when a previous term of council permitted the limousine industry to begin operating in London.  Now the taxi and limousine industries are worried about their market share being further eroded by TNCs.  If council is going to allow a new entrant into the market, it should do so in a manner that does not advantage one over the others – hence, the ‘level playing field’ argument that you’ve likely heard repeatedly.

The problem is that these three versions of vehicles for hire are dissimilar in many ways and so creating that level playing field becomes difficult.  How should we structure a license fee schedule for each?  How should the fares be set? How do we provide safety for the public?

Government really only has two tasks here – consumer protection and ensuring that regulation is a cost neutral exercise for the City (regulation is the part that is supposed to ensure consumer protection).  Whatever the license fees are, they should only be reflective of the cost of administering the licensing.  The City should not be using license fees to generate profit.  As for consumer protection, the City should be ensuring that any vehicle used to transport others on a fee-for service basis is safe and reliable, that the drivers of those vehicles have been vetted for their driving and criminal records and that the passengers are provided with a clear, consistent and transparent fee structure. At the end of the day, if these are accomplished by different means, fair treatment has been given to all parties.  It doesn’t mean that the exact same provisions need to be in place for each entrant.

So, is this debate really about cameras?  Not at all.  But that’s how many are framing it.  To be candid, I really don’t care about cameras.  It’s a red herring.  What I do care about is ensuring that both the drivers and the passengers are safe.  The level playing field in this is safety…not cameras.  If any of the three can show that there are techniques in place to mitigate the risk to the driver and the passenger, I can accept that.  I would think that the majority of altercations between a driver and a passenger occur as a result of a fare dispute.  Other reasons could include robberies, sexual assaults, or inebriated passengers.  The TNC apps require the fare to be prepaid and the driver does not handle any cash.  The reality is cameras may help to prevent robberies of drivers who handle cash and that’s about it.  I don’t see the cameras acting as a deterrent in the other cases.  They may help identify an assailant, but I’m not sure how effective they are in supporting convictions.  Even so, if you have to rely on camera evidence, you obviously haven’t prevented the bad thing from happening - you’re just trying to find the person responsible.

There will always be people who will find a way to circumvent a system that impedes them in their objectives.  Someone wanting to rob a driver could disguise their appearance.  Someone perpetrating a sexual assault could defeat the cameras or conduct their assault off camera.  Someone could create a false identity and use a prepaid credit card on a ridesharing app so they couldn’t be identified.  Those with a plan to do harm will plan for those obstacles.

So it sounds like I won’t support the camera requirement for TNCs.  Indeed, come time to vote, I probably won’t.  But this isn’t because I’m pro taxi or pro TNC.  I think both have behaved poorly through this whole debate.  I won’t support cameras in TNCs because I think the main driver/passenger safety risk comes as a result of handling cash and TNCs will be restricted to prepaid, app-based transactions. My job isn’t to protect one industry or advance another.  It’s to ensure consumer protection (drivers as a consumer of a licensing structure and passengers as consumers of a service in our city).

But that’s not where it ends for me.  Admittedly, I’m pretty ticked with Uber and I’ll single them out here.  They asked us to update our regulations and, in good faith, we began that process.  Well before we could complete the updates, Uber chose to break our laws, repeatedly.  We asked them to stop until we could pass a new bylaw and they ignored us, repeatedly.  All the while, they continue to lobby for a bylaw that reflects their desires / demands.  I say ‘demands’ because they threaten certain actions if we don’t craft a bylaw exactly to their specifications.  From my perspective, they could have had a seat at the table had they acted with good faith.  Their actions and flagrant disrespect for this government and the rules of society mean that I will ignore any requests that they may have for elements to be included in the bylaw.

I had hoped that my colleagues would suspend any discussion of the bylaw while they continued to operate illegally, but we’ve carried on.  When faced with increased costs to enforce the bylaw, I successfully moved that we increase the fine to the maximum allowed.  Why should Londoners bear the cost of someone else breaking the law?  That doesn’t mean I won’t support what makes sense to have in place in the bylaw, now it just means that I don’t care at all what Uber thinks about it.

(and I don’t believe Uber’s bluff that they will leave London if we don’t remove the camera requirement.  If they didn’t stop operating while we fine them $1000 per event, why would they leave because we require them to make a $1000 investment in each car once?)

The sticking point in the bylaw for me is surge pricing and the draft on the floor right now does absolutely nothing to address this.  I'm not against surge pricing, per se. In my opinion though, there needs to be a limit on the factor by which the fare can be increased.  The argument of supply versus demand is a little ridiculous here.  Obviously, prices of consumer goods can fluctuate based on supply and demand but I struggle to come up with many everyday examples where these change by the minute.  If I go to the store and there’s only one of the item I want to buy left on the shelf and someone else is coming down the aisle to buy it too, it’s not going to double in price before I put it in my shopping cart.  Hotel rooms prices vary based on demand but operators are required to post the maximum amount that can be charged for that room and they may not charge above that.  So, while I don’t support the requirement for TNCs to have cameras in the vehicles, without a cap on surge pricing, I can’t support the bylaw.

I wish we’d heard from Lyft or other TNCs not yet operating in London during this debate.  I think they would have had a lot to add to the conversation and, perhaps, could have done so in a manner that wasn’t hostile to the process.  I see a lot of merit in the business model of TNCs and a lot of value in their product.  I understand why so many people like to use TNCs and I have no intent to obstruct that.

Trying to balance the interests of many parties can be quite difficult and trying to achieve consensus on something like this may well be impossible.  They say a horse designed by a committee is a camel.  At the end of the day, that may just be what we have.