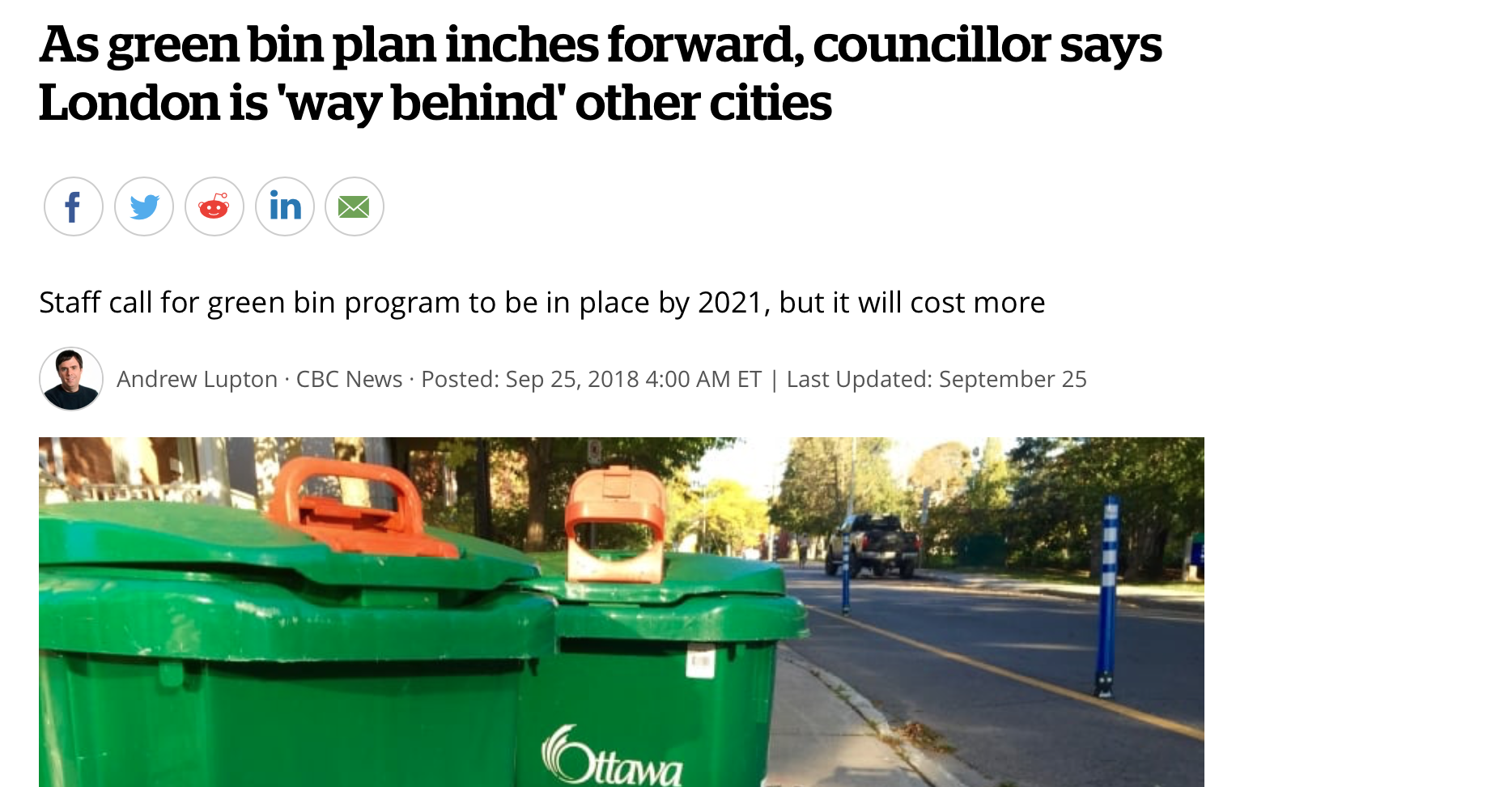 It's slated to cost the average London household an extra $36 a year, but Coun. Stephen Turner says it's high time the city accept the added expense of a green bin program.

"We're certainly the largest municipality in Canada that has not yet adopted one," said Turner, a member of the city's civic works committee. "It's showed to be tried and true tech and it would be fairly easily implementable for us because everybody else has gone through the growing pains of trying to make sure they get it right."

Turner is currently busy door-knocking as he seeks re-election in Ward 11. He says voters at the doorstep regularly ask him why the Forest City doesn't have a way to separate organic waste from the rest of the trash in the form of a green bin programs used in Toronto and other cities.

Today at a public participation meeting of the civic works committee, voters can share their views about a city plan to  divert 60 per cent of collected waste from the landfill by 2022. London's current waste diversion rate is about 45 per cent.

The big ticket item of the plan is a green program slated to cost up to $5.5 million a year in operating costs and up to $15 million a year in one-time capital costs. If accepted by council, the current proposal will put a green bin in every single-family home by 2021. Multi-unit buildings like condos and apartment buildings will start with a pilot program to separate organics.

Our landfill ... is filling up

London has capacity until 2025 at the W12A landfill located at White Oak Road and Manning Drive. The city has applied to expand the landfill but in order to get that approved by the province, they need to show an improved trash diversion rate.

If the city ends up having to export its trash, it could face an annual bill of up to $7 million, according to a city report.

Any materials we can keep out of the landfill will extend the landfill site that much longer," said Jay Stanford, the city's waste management director. "Now is clearly the time to move forward on this."

An Ipsos survey conducted for the city in June suggests most Londoners want a way to divert organics. In the survey of 301 people, about 75 per cent said they would support some kind of curbside collection of organics, even if it means paying more.

Part of the plan also includes an effort to re-educate home owners about correct use of the blue bin. Stanford said even easy to recycle items such as aluminum cans are ending up mixed in with regular trash.

Turner hopes Londoners see the value in paying more for the kind of trash diversion most other municipalities in Canada have had for years.