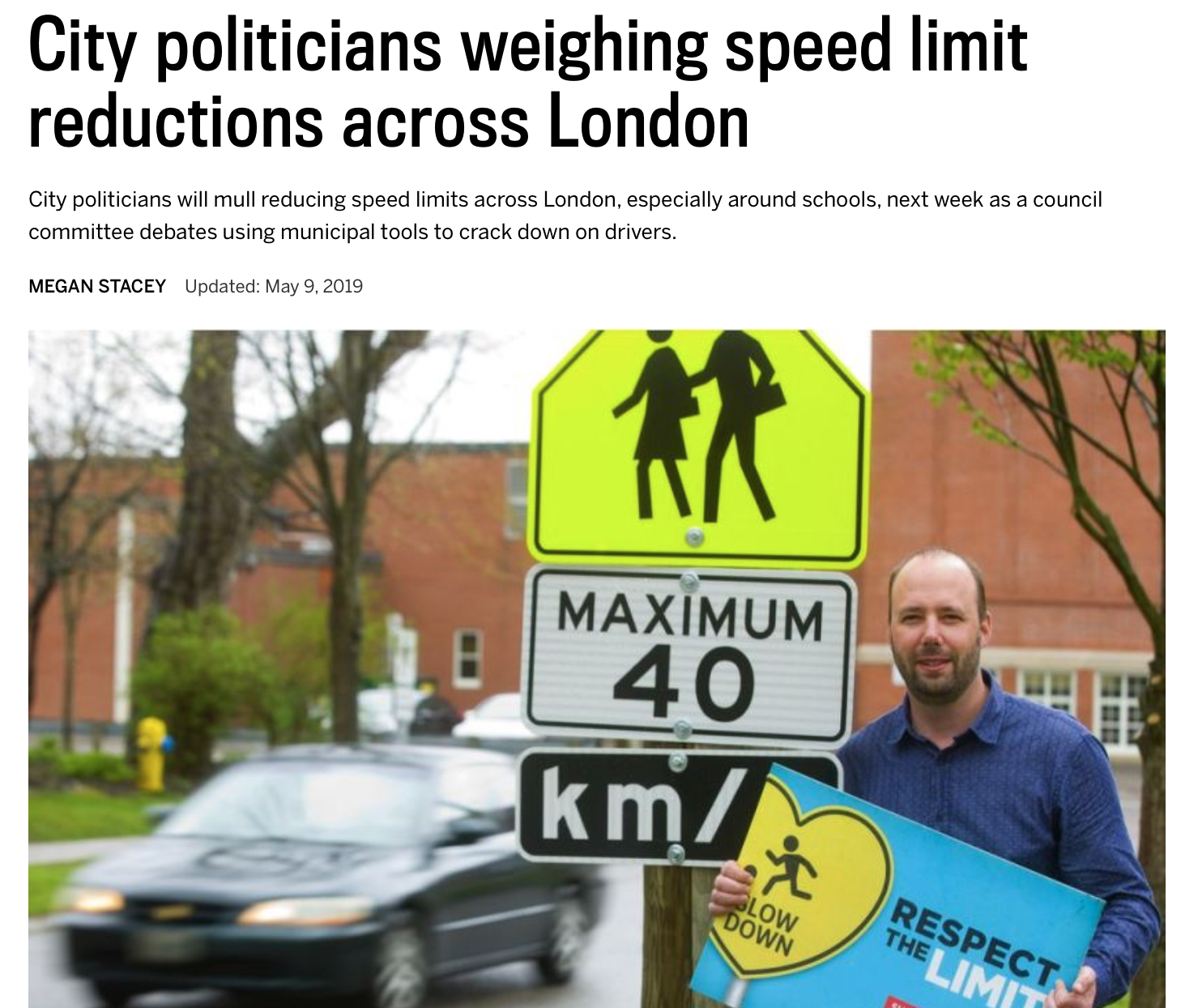 City politicians will mull reducing speed limits across London, especially around schools, next week as a council committee debates using municipal tools to crack down on drivers.

Forget the baseline 50 kilometres an hour — that’s the speed limit on all city streets, unless signs show otherwise. One politician wants to bring that down as low as 30 km/h.

Coun. Stephen Turner said speeding on residential streets is the No. 1 concern he hears from constituents and expects that holds true for every member of council.

“The perception of what the speed is affects how we interact with the street,” he said. “Do you let your kids play on the front lawn, or not, is going to be based on your perception of how fast the traffic is travelling on the street. Do you cycle on the road or walk on the sidewalks or take a different route?”

Turner pointed to a sharp decrease in the risk of pedestrian death when vehicles are travelling at 30 km/h, which a staff report pegs at 10 per cent. That’s compared to 70 per cent risk of fatal injuries when a car hits a person at 50 km/h.

“Where am I drawing my experience from? Ten years as a paramedic on London roads,” Turner said.

“I have seen what happens when a car hits a pedestrian, and it’s not something you want to see.”

Creating lowered speed zones across London would cost about $400,000 because of the speed limit signs that would have to be posted at the beginning and end of the area. Staff recommend consulting with the public and city hall advisory groups before making any changes.

The previous council opted to reduce speeds to 40 km/h around schools.

Those areas are a continued concern for Ward 8 Coun. Steve Lehman, whose northwest ward includes 10 schools. Most of them were built when families had fewer cars, he said.

“The No. 1 priority for me is the safety of our kids around our schools.”

But he wants to hear from Londoners before stretching reduced speed zones to other parts of the city.

“If we impose lower speed limits around the city, will people follow that? Will pedestrians get hurt because they’re not realizing how fast cars are truly coming? Or do we get into the cost of enforcement?”

A staff report headed to the civic works committee next week suggests that “artificially lowering” speed limits can have unintended consequences, such as driving vehicles off major streets and into neighbourhoods, or creating a distraction that may “divert a driver’s attention from the road to the vehicle speedometer.”

But other tools, such as photo radar, are also on the table. London is part of a provincial committee that’s experimenting with that tool. Politicians could decide to expand that to other parts of the city.

Turner said he wants to see enforcement using photo radar — noting he hasn’t heard much resistance when talking to constituents about the idea — but also a re-examination of the way roads are engineered.

City staff also recommend updating the process for acquiring other “traffic calming” techniques on a street, requiring a neighbourhood petition with signatures from at least 10 households before a traffic study is launched.

An unrelated report also heading to city politicians next week outlines six intersections in store for traffic and pedestrian lights. The candidates: