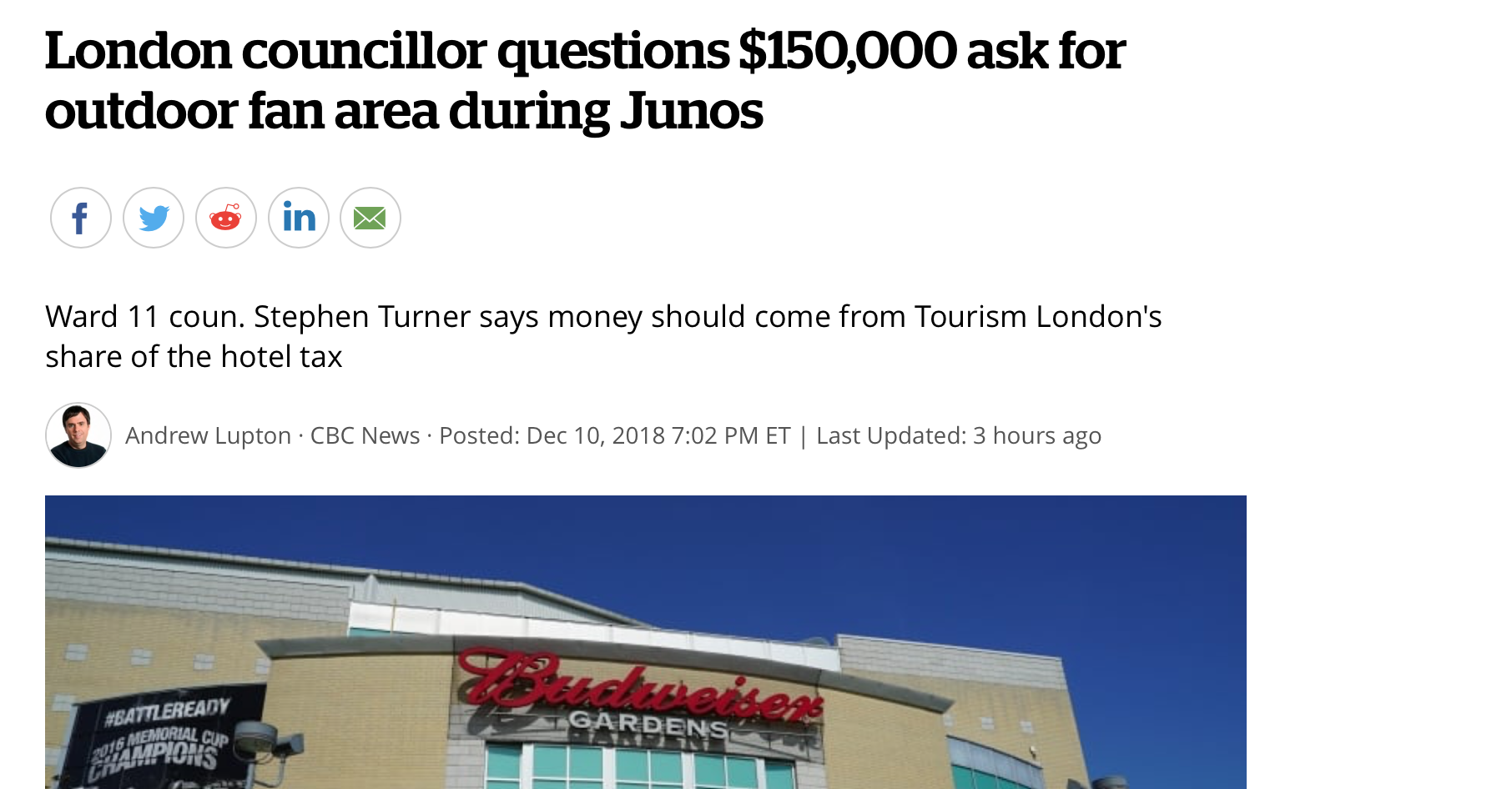 It's been generating revenue for less than three months, but already London's Municipal Accommodation Tax (MAT) is spurring arguments over how the money should be spent.

Coun. Stephen Turner is questioning a request from the city's Juno bid committee for $150,000 to pay for a temporary outdoor fan area at Budweiser Gardens during the Junos, saying the money should instead come from Tourism London's share of the MAT.

To back his argument, the Ward 11 councillor points to a staff report presented earlier this year, when the city agreed to contribute $500,000 toward the city's Juno bid. Turner believes council was promised the city's contribution would be capped there.

"The expectations were laid out pretty clearly to us in the beginning," said Turner. "That they wouldn't be seeking any further funds and that when the accommodation tax was proposed to us, [their fund] would be the source of financing for any future bid asks."

London's four per cent accommodation tax came into effect in October, with its revenue split 50-50 between Tourism London and the city.

The tax on hotel stays generated $322,000 in its first month and staff estimate it's on pace to earn about $3 million a year.

A staff report on the MAT in June laid out how the city and Tourism London would share MAT money this way:

But Turner says the city's portion was to go toward tourism infrastructure that delivers long-lasting benefits to the city, while Tourism London's portion was for event bids and other expenses. Turner says a temporary outdoor shelter to create a "one-week parking lot party" is "more suited to their fund, our fund is for infrastructure."

Winston said the city paid for similar fencing during the Memorial Cup 2005 and tenting during the World Figure Skating Championships in 2013.

Winston also said the promise to cap the city's expenditure at $500,000 was restricted to the bid fee, not expenses for the event itself.

The funding request for the fan area will come up at Tuesday afternoon's meeting of the city's Corporate Services Committee.

Coun. Turner doesn't sit on that committee and can't attend, but says he's expecting other councillors will ask some of the same questions he has.

"I'm sure my colleagues on corporate services committee will give this a thorough vetting," he said. "There may be some explanations that are perfectly viable. I haven't heard those yet. I look forward to hearing the answers and having that conversation before council next week."